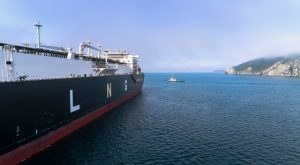 Portugal launched a global tender in October for a contract to build and function a new container terminal in Sines, continental Europe’s closest port to the Panama Canal.

Concurrently, Singapore’s PSA, which runs the only existing container terminal in the port, can also be in the process of accelerating its capability.

The planned overall growth will probably be crucial to enhance the port’s capability to receive bigger ships and more LNG cargoes from abroad for shipments to Europe.

Portuguese Infrastructure Minister Pedro Nuno Santos stated the U.S. interest and potential funding is “an opportunity we should seize”.

In the tender, U.S. corporations should face competition from Chinese rivals such as state-controlled Cosco or Shanghai International Port Group, which have expressed interest in increasing the port.

Brouillette did not refer to Chinese plans in Portugal; however, in the past, Washington has expressed concerns about heavy Chinese funding in Portugal’s energy industry along with large stakes in network administrator REN and power utility EDP-Energias de Portugal.

EDP has a significant wind power operation in the U.S.; REN owns the Sines LNG terminal.